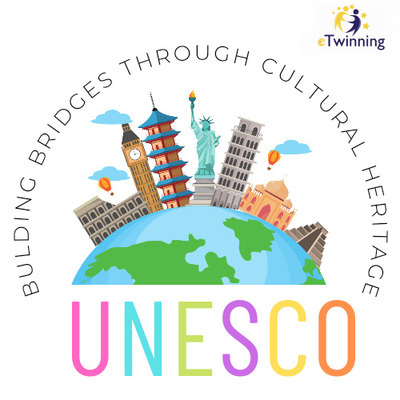 The idea of the project was born after the visit on the UNESCO’s center in Paris, during a KA1 ERASMUS+ project. Some of the partners involved were met during the courses that they attended on their KA1 projects and many of them have already collaborated on other eTwinning projects. The current project is mainly focus on cultural heritage as it is described by UNESCO. According UNESCO, cultural heritage encompasses three main categories of heritage: a)tangible culture (monuments, buildings, archaeological sites, books, works of art and artefacts) b)intangible culture (oral traditions, customs, folklore, performing arts, language, lifestyle and values) c)natural heritage, such as natural sites with cultural aspects (cultural landscapes and physical, biological or geological formations). d)digital cultural heritage with the 21st century skills (communication, collaboration, creativity, critical thinking), Students will explore their cultural heritage, its meaning and importance for the future and how it is passed on from generation to generation. They present and explain its significance and its values to their partners and by doing so they become aware of their own and European cultural heritage and learn how to enjoy it, appreciate it and care for it. Teachers will collaborate with partners from all over Europe and they will reinforce their communication and digital skills.